The Long-Term Fundamental Case for Gold

“No State shall enter into any Treaty, Alliance, or Confederation; grant Letters of Marque and Reprisal; coin Money; emit Bills of Credit; make any Thing but gold and silver Coin a Tender in Payment of Debts; pass any Bill of Attainder, ex post facto Law, or Law impairing the Obligation of Contracts, or grant any Title of Nobility.”

A quick glance at most of the headlines over the weekend and the primary focus seemed to be either calling a near term top in domestic equity indices or a focus on the Greek debt situation. Why is anyone even paying attention to what is going on over there? Until the ISDA declares a default where the underlying Credit Default Swaps (CDS) are triggered, it is all just noise.

The ECB has broken the rule of law by placing itself as the senior creditor ahead of private creditors, the Greek government is trying to pass retroactive legislation to trap private sector creditors holding out of the PSI, and the leader of Greece was not even elected by the people of Greece – how much more manipulation and insanity do we need to monitor?

Similar to the price action since 2008, central banks around the world control everything from financial markets to the ascent of political leaders. These same political leaders help central bankers and planners control policy and decision making at the highest government levels in Europe and around the world. It would seem that the United States should change the motto from “We the People” to “We the Bankers.”

However, there is one particular asset class that even the central bankers have a hard time controlling. While they can impact short term price action through direct currency manipulation initiatives, in the longer-term gold is likely to move in only one direction – higher.

The price action on Tuesday reminded market participants that actions such as the Greek bailout come at a cost. Quantitative easing and/or printing money (depending on what one wishes to call the practice of producing fiat currency out of thin air) has a direct impact on the price of gold.

The Constitution of the United States of America, which is over 200 years old, refers to gold and silver as forms of payment.  Looking back thousands of years the Romans used gold coins as a form of currency. The idea that gold and silver are currencies is certainly not a grandiose thought or a stretch of historical concept. Trying to depict gold as a worthless asset depends on your view and consideration of fiat currency.

There are those that would argue that the Federal Reserve of the United States is not actively manipulating economic conditions domestically or abroad. For those that view gold as a poor investment or hedge against currency devaluation need to consider the charts illustrated below. The chart below was produced by Thomas Gresham of Gresham’s Law. 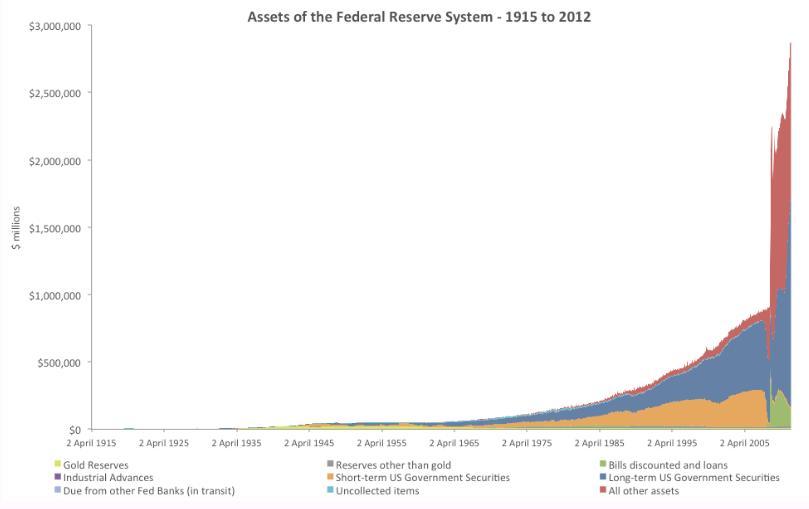 It is rather obvious by looking at this chart that the Federal Reserve has actively sought to enter domestic and foreign financial markets. The surge in balance sheet assets serves to prove how far the Federal Reserve Bank is willing to go to maintain markets which seemingly are only allowed to move higher over time.

This chart is bearish for nearly any form of paper backed assets. The above referenced chart is long-term bearish for the Dollar and Treasuries and long-term bullish for physical gold and silver. As the Federal Reserve continues to debase the U.S. Dollar in concert with other central banks’ monetary easing programs, gold and silver prices over time are destined to move higher in virtually every form of fiat currency.

During the same time frame that the Federal Reserve has seen its balance sheet grow exponentially, the rapid rise of M2 money supply is staggering. The long term chart of M2 is compared to gold futures in the charts presented below. 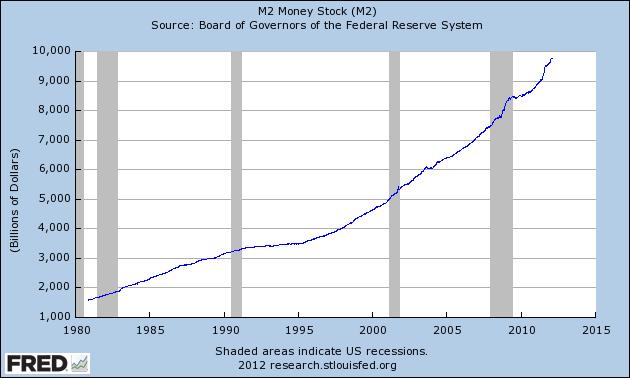 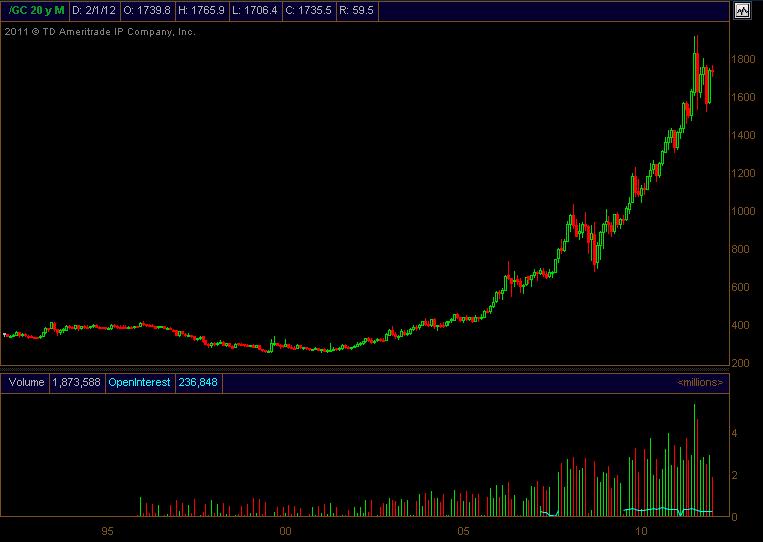 It is rather obvious what has happened to the price of gold as the M2 money supply has grown. The idea that the Federal Reserve has not already destroyed a significant amount of the purchasing power of the Dollar can easily be refuted by the two charts shown above.

In the short-term, gold and silver could suffer from a pullback, but in the intermediate to longer term it is unlikely that we have seen the highs of this bull market for either metal. As long as central banks around the world continue to print money and expand their balance sheets gold and silver will remain in a long-term bull market. The daily chart of gold futures is presented below. 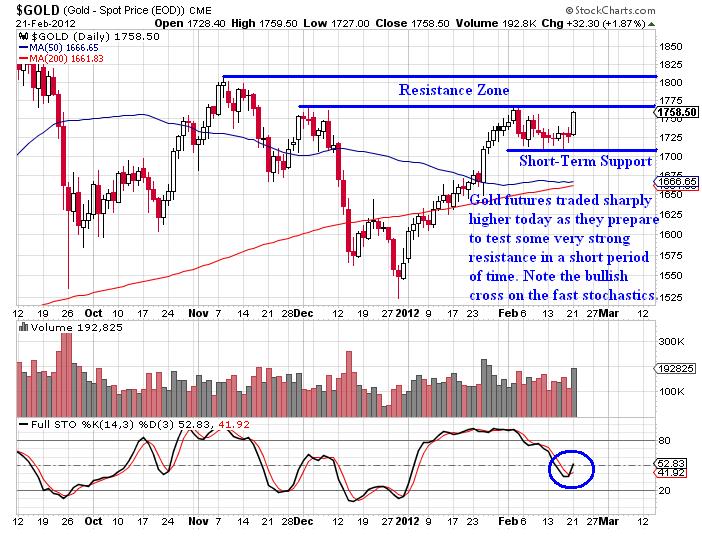 As can be seen above, it is not out of the question that we could see gold pullback to test one of the key moving averages in coming days/weeks. However, I expect the key support area to hold in the event of a sharp selloff. Ultimately, I expect to see a breakout over the resistance zone in the days/weeks ahead. However, I would not be surprised to see gold consolidate or work marginally lower from current prices before breaking out to the upside. Right now the primary threat in this fledgling gold rally is a short-term spike higher in the U.S. Dollar. The primary catalyst which could drive a flight to the Dollar involves the sovereign debt situation in Greece and the Eurozone as a whole.

While the short-term price action may be bearish, the intermediate to longer term time frames are quite bullish for metals as central banks will continue to race to debase their currencies. Quantitative easing in the U.S. and around the world will become pervasive and gold prices could potentially soar in value. The data from the Federal Reserve Bank itself suggests that they are indeed increasing the money supply. As time has passed, the money supply and gold have seemingly grown in lockstep with one another. Surely inquiring minds do not consider this mutual relationship between gold and the money supply to be purely coincidental.

As further evidence that the Federal Reserve continues to use quantitative easing to manipulate asset prices through direct entry into financial markets, a chart of the velocity of M2 clearly depicts that the velocity of money is declining. I am not an expert regarding macroeconomic data, but if the velocity of money is declining to 1960’s levels would it be a stretch to say that we may be going through a period of stagflation? The chart below illustrates the Velocity of M2 Money Stock courtesy of the St. Louis Federal Reserve Bank. 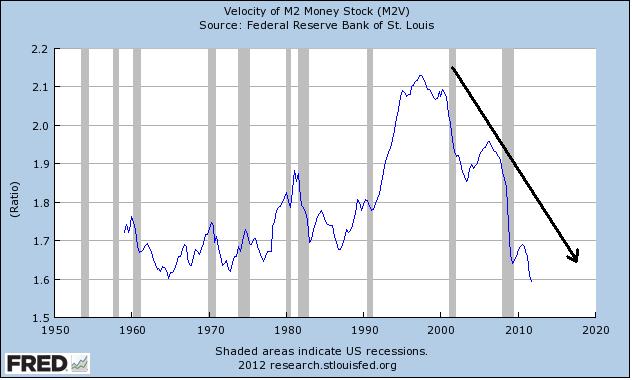 For those unfamiliar with the term velocity of money, it is simply the rate of turnover in the overall money supply. The velocity of M2 is expressed as the number of times that a Dollar is used to purchase final goods or services which are included in the total gross domestic product.

The short term technical picture in gold is a bit suspect due to overhead resistance and recent U.S. Dollar strength. However, the longer term macro factors that impact the value of the U.S. Dollar and precious metals are all telling us the same thing.

As time wears on and central banks do even more to prop up the broader economy and failing financial institutions, it is without question in my mind that gold and silver will both benefit handsomely from these decisions being made by central bankers from around the world.

Ultimately, I am very bullish of gold and silver in the intermediate to longer-term, but in the immediate short-term frame gold could consolidate or pullback before breaking out to the upside. 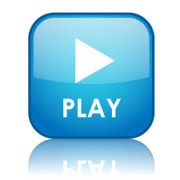 Gold, Silver and Oil Out Perform their Equities?

How to Trade IntraDay Gold and SP500

Money Will Rotate Into These Dead Investments

Gold Mining Stocks Continue to Disappoint But Not For Long

Two Short-Term Scenarios for the S&P 500 IndexWhat To Expect in the Final Week Of February for Precious Metals, Gold Stocks...
Scroll to top