“I believe that banking institutions are more dangerous to our liberties than standing armies. If the American people ever allow private banks to control the issue of their currency, first by inflation, then by deflation, the banks and corporations that will grow up around [the banks] will deprive the people of all property until their children wake-up homeless on the continent their fathers conquered. The issuing power should be taken from the banks and restored to the people, to whom it properly belongs.”

Well here we are, caught between resistance in the S&P 500 around the 1,330 area and support around the 1,300 price level. My last two articles have discussed why I was expecting a top in the coming days and weeks ahead, but prices just continued to work higher.

One of the things that I pride myself in as a person who trades and writes about financial markets in public is that I am always honest. If I blow a call I fess up and admit it. When I have made mistakes in the past, I always try to learn something new from them and I discuss losing trades publicly with readers and members of my service.

This time is different. I honestly do not know if I am going to be right or wrong. The price action in the S&P 500 Thursday was certainly bearish short term, but a back test of 1,300 or possibly even 1,280 could give rise to a Phoenix. Granted, the Phoenix is nothing more than Ben Bernanke’s pet, but that is a topic for a different time.

I have scanned through my list of indicators which discuss sentiment based on momentum, put/call ratio, the advance/decline line, Bullish Percent Indicators, and several ratio based indicators and they are all SCREAMING that a top is near. The interesting thing about the previous statement is that it would have been true a week ago and mostly true two weeks ago, yet prices have continued to climb.

The daily chart of the S&P 500 Index demonstrates the recent price action that has continued to climb the “Wall of Worry” for several weeks: 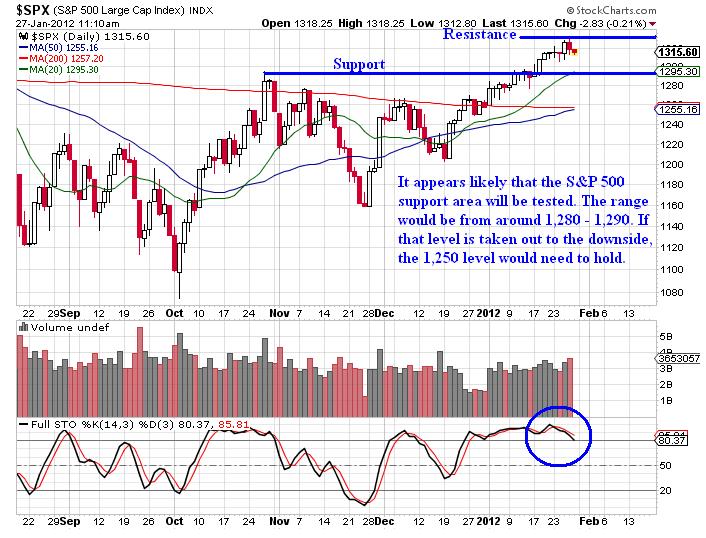 The culmination of the massive run higher for the S&P 500 was the dovish comments coming from Ben Bernanke during Wednesday’s press release and press conference.

The U.S. & European Central Banks are seemingly in a perpetual race to debase their underlying fiat currencies. The race will not end well. In fact, this type of situation smells like a Ponzi scheme where Ben Bernanke and Mario Draghi (ECB President) are the wizards behind the curtains. Their loose monetary policies and forced reflation are synthetic drugs that juice risk assets higher and ultimately Mr. Market will have his vengeance in due time.

At this point, it seems like Ben Bernanke will do anything to juice equity prices higher. I think his hope is that they will be able to artificially keep the game going until the recovery is on a more sound footing. However, when the entire recovery is predicated on cheap money and liquidity and is not supported by organic economic growth it just prolongs the inevitable disaster.

As an example, the daily chart of the Dow Jones Industrial Average is shown below. I would point out that that Dow came within 35 points (0.27%) from testing the 2011 highs. Furthermore, the Thursday high for the Dow was only 1,356 points (10.55%) from reaching the all-time 2007 October high. 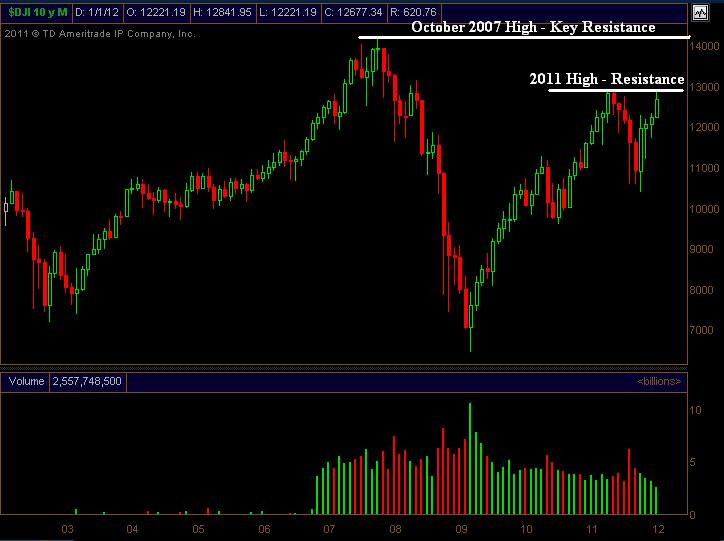 I have argued for quite some time that the economy and the stock market are two different things. If Bernanke and his cronies succeed in reflating the financial markets and the Dow reaches its October 2007 high in the near term, more retail investors will regard equity markets as being rigged.

Who could blame them for viewing financial markets as a giant rigged casino that stands to win while they continue to lose their hard earned capital? We all recognize that the current economy is nowhere near as strong as it was in 2007. But alas, the regular retail investor does not recognize that the stock market and the economy do not portray the same meaning.

One specific underlying catalyst that has gone largely unnoticed by most of the financial media during this sharp run higher in stocks is the total lack of volume associated with the march higher. The NYSE volume over the past 2 months has been putrid when compared to historical norms.

As a trader, I am forced to take risk through a variety of trade structures. However, the idea that a crash could be coming seems hard pressed as long as Big Bad Ben is at the wheel.

If the Russell 2000 drops 10%, I am convinced that Ben will be out making announcements that the Fed stands ready to intervene with all of the supposed tools they have at their disposal. Let’s be honest here, they really have one tool comprised of 3 separate functions which are all a mechanism to increase liquidity in the overall system. To express this liquidity, the following chart from the Federal Reserve shows the M2 money supply levels: 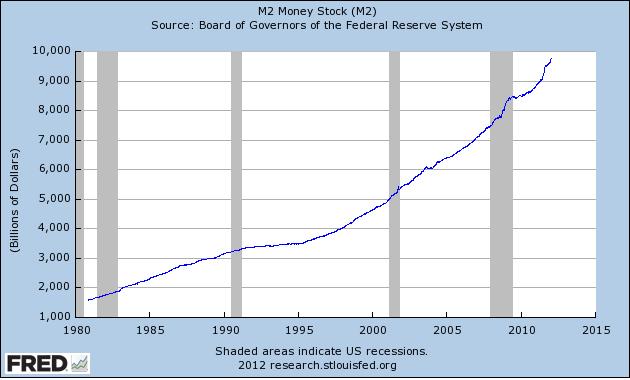 The 3 functions are the printing of currency, the monetization of U.S. Treasury debt (QE, QE2, QE2.5, Operation Twist), and exceptionally low interest rates (ZIRP) near 0 for an “extended period of time (2014).” Since monetary easing is all that the Federal Reserve has done since the financial crisis began, it begs to reason that the Federal Reserve has no other solutions or tools available. If they did, they seemingly would have used them by now.

The first bubble they created due to loose monetary policy was the massive bubble in oil in 2008. Fast forward to the present, and they are currently supporting another bubble in U.S. Treasury obligations. The bubble that they will create in the future when the game finally ends will be in precious metals. The precious metals bubble will be building while the Federal Reserve and the U.S. Treasury attempt to keep the Treasury Bond bubble from bursting.

At this point in time, if we continue down this path stocks will not protect investors adequately from inflation should the Treasury bubble burst. I would argue that the central planning and monetary policy we have seen the past few years continues in the United States and Europe that gold, silver, and other precious metals are likely to begin their own bubble of potentially epic proportions.

As the weekly chart of gold futures illustrates below, gold has recently pulled back sharply and has broken out. I will likely be looking for any pullbacks in gold as buying opportunities as long as support holds. 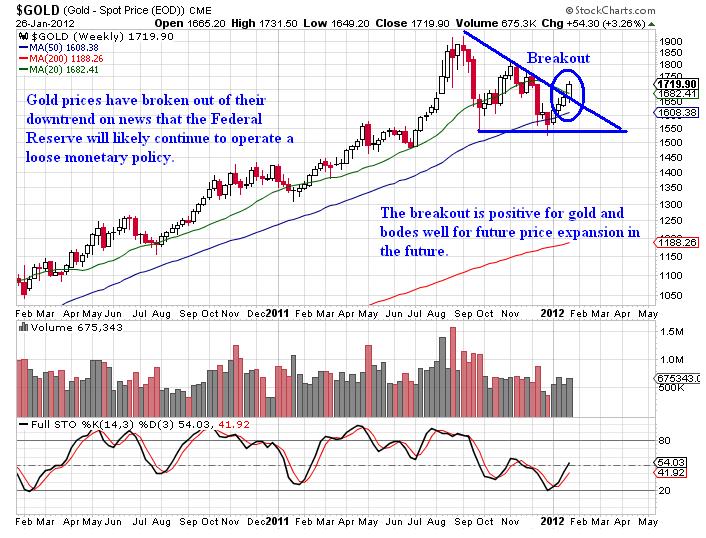 In closing, for longer term investors the stock market might have some serious short term juice as cheap money and artificially low interest rates should juice returns. However, eventually equities will start to underperform. At that point, gold will be in the final stages of its bubble and the term parabolic could likely be applied.

If central banks around the world continue to print money there are only a few places to hide. Precious metals and other commodities like oil will vastly outperform stocks in the long run if the Dollar continues to slide. The real question we should be asking is who will win the race to debase, Draghi or Bernanke?