So far in 2011 the equities market has made some sizable whip saw type moves that even veteran traders have had difficulty being on the right side of the price action. The year started out with equities being very overbought and extended making is virtually impossible for a low risk trader to buy on pullbacks. This was primarily due to the fact that there were no real pullbacks other than for a day or two which was immediately followed by prices continuing to grind higher.

In March, we finally had the pullback everyone was waiting for which we caught 4% of the sell off using an inverse ETF. Then we saw the bottom a few days later and caught a 3% gain from near the lows during a rally higher. So as you can see there have been three trends in the SP500 so far this year and we are about to see another sizable move unfold in the coming week.

In the past 8 sessions we have seen the market pullback slightly and the big question everyone is asking is do we get long or do we short here? Below are my thoughts and analysis….

US Dollar Index – Daily Chart
The dollar is still in a very strong down trend. As long as it continues to fall we should see higher stock and commodity prices. I do feel as though there is more downside for the dollar but its nearing an end. Stepping back and looking at the longer term chart of the dollar is very clear that it is getting oversold and sizable bounce should take place. If we see the dollar breakout of this falling wedge and start to rally you will want to be short stocks and commodities. 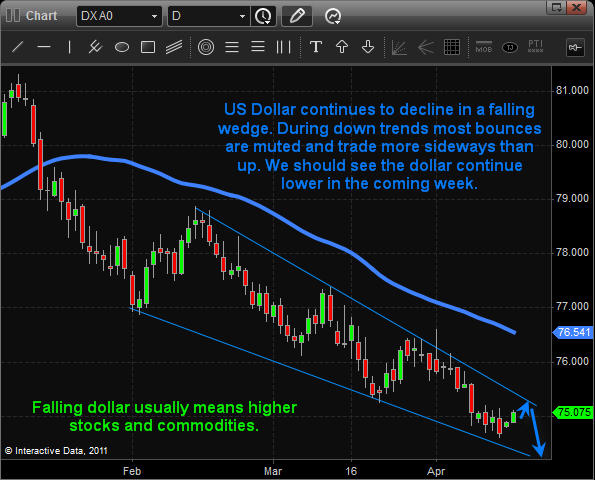 SPY ETF (SP500 Index Fund) Daily Chart
When comparing the Dow Jones Industrial Average and the Russell 2K indexes it is rather obvious that both have performed well this year and have broken above the February highs. The DOW was strong because it has it is exposed to energy stocks and with oil rocketing higher, it has helped those energy based stocks lift the index higher. The Russell 2K consists of small cap stocks and with the general public still being so bullish on the equity markets and investors are buying volatile, high risk small cap stocks to help boost their gains.

Now, looking at the SP500 it has yet to break the February high and this is because it holds several large tech stocks and financial stocks which have been lagging the overall market so far this year. Tech stocks and financials tend to lead the market and the fact that they are not is of great concern to me.
So going back to the US Dollar, I feel as though it has a little more downward motion left which will help get the SP500 to a new yearly high. Once the dollar rally starts, it will crush stock and commodity prices for several months. 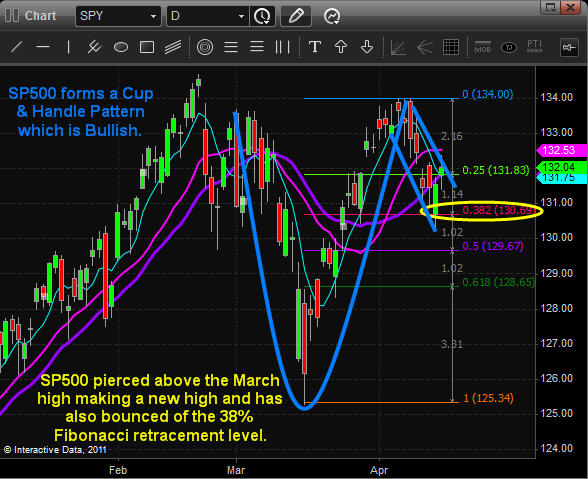 1. Quantitative Easing is now done = rising dollar
2. Investor sentiment is at an extreme bullish level = typically a bearish sign for stocks
3. The Sell In May and Go Away is almost here…
4. Earning season is here and that is typically a time when stocks get sold into = lower stock prices
My final thought is to keep positions small and be ready to flip positions from long to short and vise versa depending on what you trade…

Get My Free Trading Rule Guide And My Weekly Newsletter Here: https://www.thegoldandoilguy.com/trade-money-emotions.php

How to Trade Gold and other Commodity ETF’s